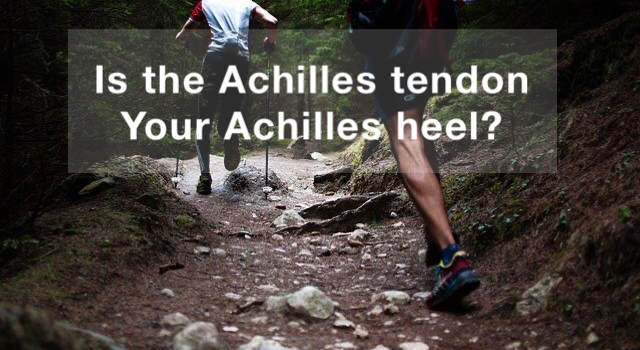 Is the Achilles Tendon Your Achilles Heel?

Did you remember watching the Toronto Raptors 2019 NBA Championship run? You may recall a specific moment in Game 5 of the NBA finals against the Golden State Warriors. Kevin Durant, the Golden State Warriors’ superstar, bounced the ball between his legs in an attempt to get past Serge Ibaka of the Toronto Raptors. He pushed off with his right leg, pivoted on his left, when all of a sudden he felt a pop in the back of his right lower leg. Durant then limped off the court ending his playoff run. Two days later, he had an achilles tendon surgical repair. While he hasn’t returned to the court since, he’s expected to return for the 2020-2021 NBA season.

So what happened? How can a body part of an athlete who’s so fined tuned to his sport suddenly tear?

The achilles tendon is the strong, thick fibrous band that attaches the calf muscles to the heel bone. This tendon is incredibly strong. Like a thick rubber band it can store energy to push off with explosive power. It’s the longest and strongest tendon in the body but it also happens to be one of the most commonly ruptured tendons in the body. Even though it is designed to withstand loads many times our body weight, things can still go wrong and often without any warning signs.

Complete achilles tendon ruptures are most common in men between the ages of 30-40 who are “weekend warriors”. Meaning those who only participate in an activity occasionally in there spare time. Sound familiar? We also know that being overweight, having poor running mechanics, altered foot mechanics and history of prolonged steroid medication use can all influence ones risk of this injury. Ultimately these injuries can happen to anyone and even world-class athletes like Kevin Durant.

I am not quite so fine-tuned, I enjoy hiking, do I need to worry?

The most common cause of acute tendon ruptures are with activities that involve sprinting, pushing off and stop and go movements. Think sports like basketball, soccer, volleyball, tennis and badminton. Surprisingly, most achilles ruptures are non traumatic in nature.  A simple, seemingly innocent push off of the foot of the floor (like in Durant’s case) or sudden forward bend of the ankle can be enough to overload the tendon.  At the moment the tendon ruptures, individuals will often describe a sensation of being stabbed in the heel with a knife or feeling like someone has just kicked him or her in the back of the calf. A pop or loud crack may often be felt or heard at the time of injury. Immediate weakness, bruising and swelling at the back of the calf is typical.

So what do we do about these injuries and is there anyway we can prevent them?

Whether you’re a weekend warrior or an elite athlete, there is always the debate whether surgery or conservative management is best. Surgery used to be the most common approach but the non-operative options have significantly improved over the past decade. A surgical repair involves sewing the torn ends of the achilles together. Athletes of Durant’s level tend to go this route, as there is belief that this approach may shorten the time to return to play, maximize achilles strength and may reduce the risk of future re rupture.

The purpose of non-operative management is to restore contact between the two ends of the ruptured achilles tendon to facilitate healing and scarring down of the tendon. To do this the ankle is immobilized in a position were the two ends are able to come together in a rigid cast or brace.

Ultimately, the decision about surgical versus non-surgical treatment is made based on an individuals age, activity level, risk factors for re-tear, and underlying medical issues.

So what does the recovery look like after an achilles rupture?

Most individuals can expect a timeline of 9-12 months for a full recovery and return to sport. This is true for both surgical and non-surgical management styles. Once the cast or brace is removed the focus is first improving ankle range of motion and beginning to weight bear on the leg. There are many protocols that have been developed to help optimize management. These protocols vary a bit but the general timelines and goals remain the same. Progressive lower extremity mobility, strength, endurance and balance exercises are increased as healing progresses. Gait retraining, running and sport specific exercises are introduced when appropriate.

Now what about prevention?

If you are experiencing achilles or calf pain, this would be a good time to start managing it. Tendons that eventually rupture will often show signs of tendinopathy or tendon inflammation far before the rupture occurs. Managing these changes to the tendon with an individualized rehab program to ensure your ankle and foot are moving well along with having sufficient balance and strength is your best strategy in preventing this. This will increase and restore the tendons strength and ability to store energy more effectively. Interestingly enough, Kevin Durant had been dealing with a calf injury, on the same leg for a few weeks before his achilles rupture. He missed several games because of this calf injury and was in his first game back when he ruptured his achilles. There is speculation that he in fact may have not been 100% recovered from this injury and returned to soon. This was likely was a major factor in why he ruptured his achilles. So if you have noticed any achilles or calf pain over the years, don’t delay. This ongoing issue could in fact become your achilles heel.

This information is not meant to replace the advice or treatment of a qualified physician or physiotherapist.  It is meant for information only.  Please seek an assessment and discuss your treatment options with your caregiver prior to making a decision about your treatment path.

0 comments on “Is the Achilles Tendon Your Achilles Heel?”